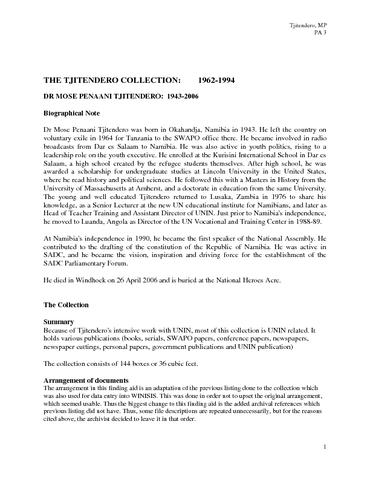 Dr Mose Penaani Tjitendero was born in Okahandja, Namibia in 1943. He left the country on voluntary exile in 1964 for Tanzania to the SWAPO office there. He became involved in radio broadcasts from Dar es Salaam to Namibia. He was also active in youth politics, rising to a leadership role on the youth executive. He enrolled at the Kurisini International School in Dar es Salaam, a high school created by the refugee students themselves. After high school, he was awarded a scholarship for undergraduate studies at Lincoln University in the United States, where he read history and political sciences. He followed this with a Masters in History from the University of Massachusetts at Amherst, and a doctorate in education from the same University. The young and well educated Tjitendero returned to Lusaka, Zambia in 1976 to share his knowledge, as a Senior Lecturer at the new UN educational institute for Namibians, and later as Head of Teacher Training and Assistant Director of UNIN. Just prior to Namibia's independence, he moved to Luanda, Angola as Director of the UN Vocational and Training Center in 1988-89.
At Namibia's independence in 1990, he became the first speaker of the National Assembly. He contributed to the drafting of the constitution of the Republic of Namibia. He was active in SADC, and he became the vision, inspiration and driving force for the establishment of the SADC Parliamentary Forum.
He died in Windhoek on 26 April 2006 and is buried at the National Heroes Acre.

The arrangement in this finding aid is an adaptation of the previous listing done to the collection which was also used for data entry into WINISIS. This was done in order not to upset the original arrangement, which seemed usable. Thus the biggest change to this finding aid is the added archival references which previous listing did not have. Thus, some file descriptions are repeated unnecessarily, but for the reasons cited above, the archivist decided to leave it in that order.

Can duplicate a maximum of a third of a file. The material duplicated may not be published without permission of copyright owner.