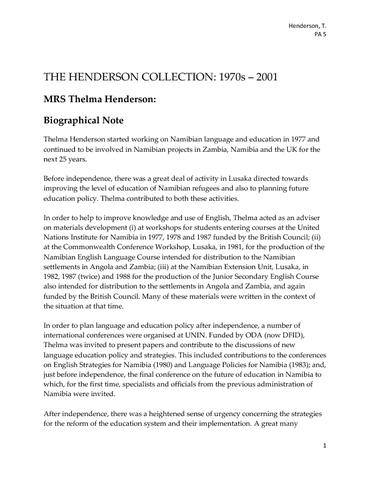 Thelma Henderson started working on Namibian language and education in 1977 and continued to be involved in Namibian projects in Zambia, Namibia and the UK for the next 25 years.
Before independence, there was a great deal of activity in Lusaka directed towards improving the level of education of Namibian refugees and also to planning future education policy. Thelma contributed to both these activities.
In order to help to improve knowledge and use of English, Thelma acted as an adviser on materials development (i) at workshops for students entering courses at the United Nations Institute for Namibia in 1977, 1978 and 1987 funded by the British Council; (ii) at the Commonwealth Conference Workshop, Lusaka, in 1981, for the production of the Namibian English Language Course intended for distribution to the Namibian settlements in Angola and Zambia; (iii) at the Namibian Extension Unit, Lusaka, in 1982, 1987 (twice) and 1988 for the production of the Junior Secondary English Course also intended for distribution to the settlements in Angola and Zambia, and again funded by the British Council. Many of these materials were written in the context of the situation at that time.
In order to plan language and education policy after independence, a number of international conferences were organised at UNIN. Funded by ODA (now DFID), Thelma was invited to present papers and contribute to the discussions of new language education policy and strategies. This included contributions to the conferences on English Strategies for Namibia (1980) and Language Policies for Namibia (1983); and, just before independence, the final conference on the future of education in Namibia to which, for the first time, specialists and officials from the previous administration of Namibia were invited.
After independence, there was a heightened sense of urgency concerning the strategies for the reform of the education system and their implementation. A great many consultancy reports were written about the existing education system and the changes that would be needed to bring it into line with the new government’s mission. Thelma was invited to write several of these reports for the Ministry of Education: Introducing English within the Formal System of Education (1990); Introducing English within the Adult and Non-Formal Sector of Education (1991); English at Tertiary Level (1994); English Language Teacher Education in Namibia: Current State and Future Needs (1994). In order to write these reports, it was important to take account of the emerging new education system and the ways in which a new second language might fit within it. The documents reflect the wider context of education reform
Parallel to these activities in Africa, Thelma was also Joint Director of what is now called the Centre for Applied Linguistics at the University of Warwick. Warwick was always very proud of its Namibian connections and of the fact that Namibians were trained there in subjects such as law, economics and education.
Due to work on the language and education policy, a number of groups of Namibians students were received at Warwick who attended teacher education and postgraduate courses; and established a link with the new Language Centre at the University of Namibia.
The groups of education students started coming to Warwick before independence, the first being a group from UNIN who took part in a split B. Ed programme which had been specially designed for them. It was followed, after independence by other groups who came to study for the Diploma in English Language Teaching and, later, for the MA in English Language Teaching. A number of teachers, lecturers and education officers, in Namibia now, will remember their experience in the UK.
When the Language Centre was set up at UNAM, a link was established with Warwick. It involved the provision of advice and support for the Director and the staff. Staff from UNAM visited Warwick and vice versa over a period of time. It was hoped that those initial contacts would prove useful in setting up and sustaining the work of the UNAM Centre.
When Thelma finally retired in 2001, she still had a large collection of documents about Namibia which had been assembled over the previous 25 years. She always felt they belonged in Namibia as a basis for research for younger generations. These are the set of documents which make this collection.

Donated to UNAM on behalf of Thelma Henderson by Prof. Mawditt on 21 February 2013 at UNAM, Windhoek.

All the Henderson collection has been preserved.

The collection has been re-arranged by the archivist having noted that there collection did not come with any formal and systematic arrangement scheme – this is common with personal collections. The archivist re-grouped items in the collection according to (i) subjects, (ii) records series (classes) in an attempt to group together items that would make sense for them to be together, for easy access to researchers. This resulted in a total of 11 classes - articles, books, booklets, curriculum and syllabuses; newsletters; policy statements; posters, proposal, reports, seminars, and teaching & training materials

Can duplicate a maximum of a third of a file. The material duplicated may not be published without the permission of the copyright holder/owner.