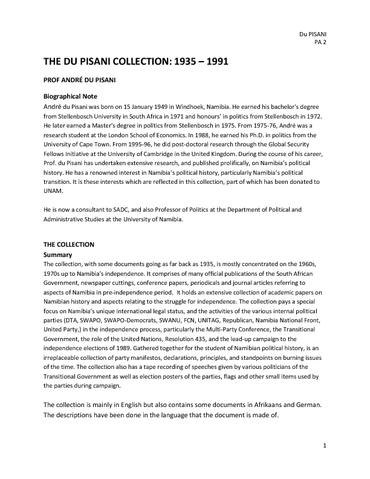 André du Pisani was born on 15 January 1949 in Windhoek, Namibia. He earned his bachelor's degree from Stellenbosch University in South Africa in 1971 and honours’ in politics from Stellenbosch in 1972. He later earned a Master's degree in politics from Stellenbosch in 1975. From 1975-76, André was a research student at the London School of Economics. In 1988, he earned his Ph.D. in politics from the University of Cape Town. From 1995-96, he did post-doctoral research through the Global Security Fellows Initiative at the University of Cambridge in the United Kingdom. During the course of his career, Prof. du Pisani has undertaken extensive research, and published prolifically, on Namibia’s political history. He has a renowned interest in Namibia’s political history, particularly Namibia’s political transition. It is these interests which are reflected in this collection, part of which has been donated to UNAM.
He is now a consultant to SADC, and also Professor of Politics at the Department of Political and Administrative Studies at the University of Namibia.

In most cases the original arrangement as provided by Prof. du Pisani was maintained, especially where he was putting together documents covering the same broad subject, e.g. documents relating to the Multi-Party Conference were kept together. Thus, most subject files are listed under MISCELLANEOUS as they could not fall under a specific class e.g. REPORTS or MINUTES. However, where files did not refer to any specific subject theme, these were entered under the various classes to which they would fall e.g. ARTICLES, NEWSPAPER CUTTINGS, CORRESPONDENCE etc. (See summary of classes list). All the articles from each folder are listed individually because each folder has a broad and general theme not a specific one. Thus, individual listing of each article was done, though unusual, in order to allow easy access to specific articles and topics.

Can duplicate a maximum of a third of a file. The material duplicated may not be published without permission of copyright owner.